All night I’ve been up, unable to sleep. There has been a lot of that lately, when it seems that if I lie down and allow the darkness to envelope my senses the ones who come knocking at my heart will slip through the wall that I have been trying so desperately to brace. Part of it arises out of a real fear of perhaps not waking. Two years ago, soon after the New York tragedy, while alone in my apartment, I woke to a terrible gripping in my chest. I was terrified that it was a heart attack, but having had a similar occurance earlier and reassured by my diabetes doctor that there was nothing wrong, just nerves, I waited it out until it subsided. I lay a long time afterwards, staring at the dark ceiling while my eyes strained to make recognizable forms out of the wraiths that swam along the corners of my night vision. A stillness hung in the room, like death, without a soul to pierce the mirror of self awareness. I lay until the first light illuminated the curtain, rolled out of bed, changed into some pants, a shirt, and jacket, and went meandering through the neighborhood, half relieved, half grieving at the utter matter-of-factness and simplicity of birds heralding the morning.

Tonight I tamped the chinks of my mind with the exercise of building a small downdraft gasifier wood burning stove, an elegant and easily constructed fitting of various items such as an old oatmeal can, a tomato can, and an oil filter can. I’ve been applying to a simplified approach to both walking in the mountains and my everyday life, by learning to make my own equipment and eliminating superfluous items. During the summer vacation I learned to sew and put together my first camping hammock, and the surprise in the ease with which I learned something that had intimidated me before lent me a new confidence. 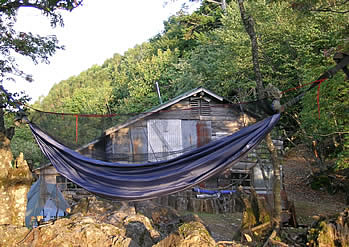 I set the finished stove out on the back porch and filled it with pieces of snapped dry twigs. When I threw the match onto the tinder it first erupted in a blaze of flames then drew in on itself with a cloud of white smoke from some wet twig in the pile. The smoke billowed like a ghost through the courtyard, rising up past the walls of the two-story apartment, and clearing into the void beyond the eaves. I crouched on the concrete and stared into the stove, willing the glow at the base of the burner chamber to kindle into life. The smoke abruptly slackened and disappeared, followed by a blue burning within the chamber and the first embers of the twigs turning to charcoal. It was like a tiny god contained in a pot, eyeing me back. The heat wafted into my face and flickered and the touch that I longed for passed for a fleeting instance across my cheek. The stove deity glowered back, drawing further and further away, until once again I inhabited the courtyard’s stillness and darkness alone.

Light spills through the curtains again. The courtyard has shrunk back to its familiar weedy self and all vestiges of phantoms and doppelgangers drawn into the cells and capillaries of the trees and walls. The melancholy that flapped in the small of my back moults into feathers and wind, tipping my eyes toward the horizon. Night bundles the hard edge of doubt and journeys back through the caverns of forgetfulness. And I am infused with a different sort of stillness, a stillness that blinks and gazes about, not sure if sleep has begun.

… and I go dancing into the sunrise…!

This is a beautiful post, Miguel. The description of kindling your new stove and encountering that “little god” within, and then the solitude beginning again, was evocative and touched me; I thought about it many times after reading it.

Thanks for your comments, Beth. I was a bit nervous about this post because several people who read it had voiced discomfort with it. I seem to have a knack for making people uncomfortable.

Lately your comments and posts and letters have gotten me thinking about a lot of things, even late at night. Never had I thought that blogging would get me to spend so much time contemplating thiings, but it’s people like you who have inspired me and who have made it as exciting as it is. Thanks!

This site uses Akismet to reduce spam. Learn how your comment data is processed.