This is what it takes to get people’s attention: virtual total destruction of your habitat…

Over 80% of the forest that covered almost the entire archipelago of the Philippines has been decimated. I remember as a boy in 1971 visiting the Pagsanjan river south of Manila and being overwhelmed by the heavy lushness of the rain forest overhanging the banks of the river, the trees filled the calls of birds and monkeys, and then visiting again in 1992 and finding the water flushed brown with mud, floating with garbage so thick that you could barely see the river water, carcasses of pigs and dogs in various states of decomposition bobbing past the dugout canoes being punted upriver while the river guides, in between demanding “Pipty dollars, you hab?, and with banks bare and dusty from clear-cut forest cover and the silence of birds and monkeys long gone. This has happened throughout the Philippines and the soft, volcanic mountainsides have given way to treacherous erosion that now contribute to the disaster of the four ferocious typhoons this week.

People can complain that they are helpless to do anything; that the problem of environmental destruction is beyond our individual abilities to change, but that is merely an excuse to continue with the way of life we are all so used to. As long as we don’t seriously act the world will continue its gathering momentum of decline until we will truly be helpless in the throes of planetary reaction: worldwide monster storms, coastal lands drowned by huge seas, massive starvation, wars and mass migration that make Iraq look like mites at play. Exactly what will it take for the whole world to finally take heed?

Ten years ago I saw a tiny article at the back of the Japan Times announcing the death of the last wild Philippine Eagle (Pithecophaga jefferyi).
It was such an uncaring side note to such a magnificent bird (a full grown Philippine Eagle stands about 1 meter (3 ft) tall, with a wingspan of about 2 meters (almost eight feet) ) that I broke down weeping alone in my apartment. And the sad thing was that it was something I could not share and find solace with anyone I knew who would truly comprehending why I was crying. I mentioned the article to one colleague I was working with and his reaction was, “So, it’s just a bird. There are a lot of poor people in the Philippines.”

That’s just it… we think of ourselves as more important than anything else. We are “above” nature and woe to anyone who would seriously suggest that we are anything but. Constantly we seek confirmation of our superiority; the television stations airing animal shows are constantly revealing â€œamazementâ€ at the intelligence and versatility of other fellow creatures, as if it is merely an aberration that an animal might exhibit the same characteristics that we humans seem to consider our moral claim. Yes, there are a lot of poor people in the Philippines. I’ve met them, eaten with them, even stayed in some of their homes. But if we cannot empathize with and feel the desolation of the disappearance of our living home and the fellow creatures in it, we can feel nothing. 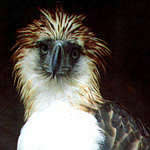 This blind disdain will be our undoing. No creature that thinks of itself beyond dependence on its habitat can long survive. As long as we think of ourselves as independent of the natural world… call it the mother of all egos… the imbalance will continue to grow, until one day it all comes crashing down.

But there is hope. Some of us are waking and taking the first steps toward re-harmonizing. In April this year, Kabayan (“countryman”) became the first captive bred Philippine Eagle to be released into the wild. All indications (the Philippine Eagle Foundation) say that Kabayan is doing quite well. These are the kind of efforts that we, as individuals, can definitely do. Bring us all together and we have a worldwide turnaround.

This is our home. All of us.

This site uses Akismet to reduce spam. Learn how your comment data is processed.